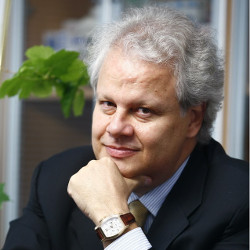 Jean Valvis was born in Athens on July 16, 1954, but his family lives in Geneva, where he started his studies. After finishing primary and middle school in Geneva, he attended “Varvakios” Model High School. In 1973, he started his academic studies at the National Technical University of Athens, graduating in 1979 with an architect engineer degree. In 1980, he attended the courses of the University Paris I, Pantheon Sorbonne, getting an Advanced Graduate Diploma in Architectural Aesthetics (DEA), entitled “Argument on Space and Architectural Composition”. In 1982, he obtained a research grant from the Aristotelis Onassis Foundation and drew up a thesis at the same University of Sorbonne, entitled “Model Theory in Architectural Design Process”.

He is one of the most important foreign entrepreneurs in Romania. He has Swiss and Greek citizenship. He is married and has two sons

In 1994, he established Valvis Holding setting up Dorna Apemin, a joint-stock company with Romanian-Swiss capital.

Within this company, three mineral water plants were built under the Dorna brand in Vatra Dornei, Suceava (Dorna, Poiana Negri, Izvorul Alb), between 1996-1999.

In 1998, he established Dorna Lactate SA and built, under the green field scheme, a diary processing plant in Dorna Candreni and, in 1999, a process cheese factory in Vatra Dornei, processing a range of 85 dairy products under LaDORNA brand. In 2000, he established a subsidiary of the holding in Athens: Dorna Hellas.

In 2002, he concluded the transaction with Coca Cola and sells Dorna mineral water division. This year he also laid the foundations of the Ecological Biofarms project, as part of the eco agricultural activity performed by the Dorna Agri company, project launched in 2004, for Bio cereals. In 2003 and 2004, a cottage cheese factory (Ortoaia, Suceva) and a sheep milk feta cheese (Mihail Kogalniceanu, Constanta) are built under the green field scheme.

In 2006, he invested in SC Viti-Pomicola Samburesti and in 2009 he launched a range of wines under the following brands: Château Valvis, Domeniile Samburesti and Samburel de Olt.

In 2008 LaDorna dairy products division is sold to Lactalis, the second largest dairy company in the world.

From now on, Jean Valvis focuses on developing the wine division- Domeniile Samburesti and starting other projects which started showing results in 2010: extending investments in eco agriculture and eco energy projects with Dorna Agri, on 10,000 ha land nearby Calarasi (Roseti), South of Romania and launching the brand AQUA Carpatica, the only naturally sparkling mineral water in the world with 0g nitrates/liter. Even from its launch, AQUA Carpatica became a success and a serious competitor for the mineral water market in Romania, the claim - “The purest mineral water in the world”, a water with a unique characteristic: zero nitrates.

He was named Entrepreneur of the Year in 2001 and 2010 by Bucharest Business Week Newspaper, Entrepreneur of the Year in 2006 by Capital magazine, and in 2004 awarded by Daniel, The Metropolitan Bishop of Moldavia and Bucovina, with The Cross of Moldavia and Bucovina for his involvement in supporting the local community and the environment by creating new jobs.

- CRINA Foundation Program A program involving donation of products, on a monthly basis, for the children of CRINA foundation. The contribution started in 2006.

- Valvis Class in Iasi. A scholarship program for children with special intelligence and abilities but poor social condition (since 2008)